We booked 3 nights in Fethiye- in a nice upscale hotel with an ample supply of hot water!! Fethiye has a beautiful harbour, surrounded my mountains, with breathtaking sunsets. As with everywhere else- it was pre-tourist season, so things were quiet. We booked onto a day cruise of the nearby islands, and spent the day sitting up top of the yacht as weather permitted. The coast is dotted with small island communities. We docked at quiet coves to allow for a swim- my American friend was the only one brave enough to actually get into the chilly waters. We saw dolphins and a sea turtle. It was a lovely day.....until the winds and rain picked up, and I wished I'd brought a portable space heater with us!! 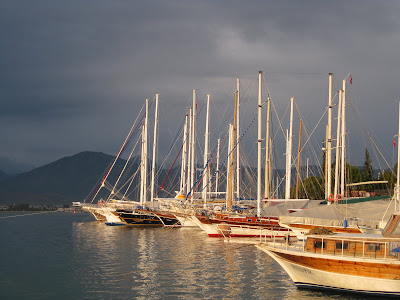 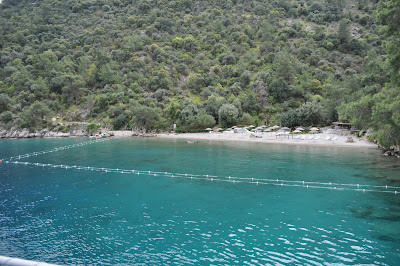 One of the big draws to booking the hotel we did was that they had an outdoor jacuzzi. After spending 3 nights without hot water in Kas we were both looking forward to a nice soak coupled with a bottle of wine. To our surprise and amazement we were informed that the jacuzzi was "out of season, and was too cold to be used." We of course became confused as to how it was out of season- as it was cold outside- isn't that the point?? Apparently, jacuzzi's are meant to be cold- according to Turkish standards. Soooo disappointing :(

Our last day in Fethiye we arranged to rent a car. Mind you I haven't driven a stick shift in over a year, but it was just like riding a bike!! We headed off towards some Lycian tombs overlooking the city, then headed to the ruins of Tlos about 45min from Fethiye. These ruins are in excellent condition, but are surrounded by farmer's fields, and cows and goats are let out to feed amongst the ruins. From Tlos we drove back towards Fethiye and stopped off at Kaya Koya- a large ghost town that was deserted in the 1920's. Its actually quite eerie, and pretty much deserted. We met some Asian girls who were freaked out as a crazy man had been following them. Fortunately, we didn't run into said crazy man!!! From the ghost town we headed to Oludeniz Beach otherwise known as the "Blue Lagoon" and sunned ourselves, and watched the many para sailors flying overhead. We dropped the car back off without incidence!!!
One evening while wandering the walkway along the waterfront we came across a second hand book store with a large variety of English books. Amongst them I came across a book written by a gentleman named Iceberg Slim with the title of the book being "Pimp." What a find!!! It is highly offensive, and not for the weak of heart, but provided us with more laughs imaginable. We spent the rest of our trip talking in 1940's gangster/ pimp/ jive lingo!!!
Posted by Kristine at 6:57 AM