So  a couple weeks ago a Canadian, a Kiwi, and an American set off to Oman for a week. We had a blast! Oman was completely refreshing coming from Saudi. It is a Muslim Middle Eastern country, and yet women can drive, don't have to cover, and you can drink!! I was surprised at how calm it felt compared to Riyadh. No angry glares, the driving was about a million times better!

We flew into Muscat, and "thanks God" (as my roomie says) the flight was uneventful. Well, uneventful if you block out the Talibanish looking dudes sitting in economy. They made me a little nervous, and were dressed for 'caving' weather if you get my drift. Muscat was great- we spent a couple days there. Had an interesting encounter at a Omani strip club on accident, walked the corniche, and most importantly drank to our heart and liver's content. We opted to "couch-surf" in Muscat, and stayed at a super cool Australian couple's villa- they were great hosts!!

We had organized a 3 day tour of Oman, and on our 2nd morning our tour guide picked us up and we hit the road. He was an interesting character, who in true middle eastern fashion was more busy trying to figure a way into our pants then on giving a proper tour! He was oh so not subtle in his constant glances to ensure that our breasts were still in the same place as the last time he looked. His English was decent though, and for this we tolerated his shenanigans. He also let us drive the tour company's land rover, and I had a great time doing donuts in the desert!!
We spent time in Bahla, took a tour of Al Hootra cave- one of the largest in the world, toured a historical village outside of Al Hamra, toured Nizwa fort, and Jabrin Castle. We spent an afternoon in Wahiba sands with a Bedouin family, 4X4ing, and riding camels. We swam in wadis that were breathtakingly beautiful. We drove the Omani coast, dipped our feet in the Indian Ocean, and saw a sea turtle attempt to lay her eggs and then return to the ocean. It was awesome, and we packed a ton of things into the week. 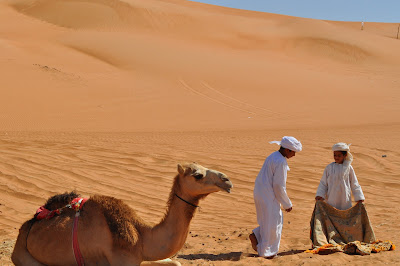 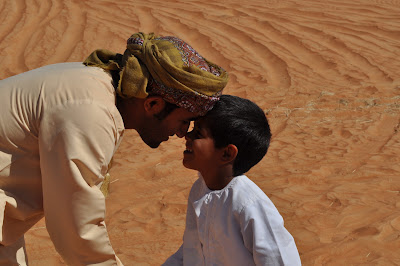 After our tour we returned to Muscat, to stay with the couple we met off couch surfing. We slept in, shopped, and walked the beach. It was a relaxing last couple days filled with good food, lots of drinks, and some great company. Oman exceeded my expectations, and may have bumped Jordan from my #1 spot of Middle Eastern countries!! Oh-Man until we meet again!!
Posted by Kristine at 6:20 AM