Indiana Jones here we come!! The number 1 tourist attraction in Jordan is Petra, and it definitely lived up to our expectations. The park opens at 6am, and we were there just as it opened. This is the best time to go as the sun is starting to rise, and there are minimal tourists to eff up your photos. Also the heat is pretty unbearable- so best to go early!! You have to walk about 1.5km through a canyon before you approach the Treasury building. There were maybe only another 5 people who woke up early, so we really had the place to ourselves. The site is large, and you can't see everything in 1 day. We had only about 5hrs to see what we could- so we made the most of it. The Treasury was larger than I had expected, and has sustained itself so well because it is protected from the wind and rain, as it sits back into the rock that it is carved out of. 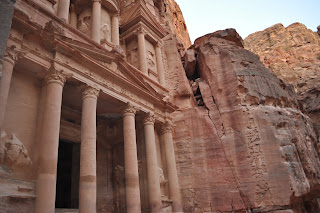 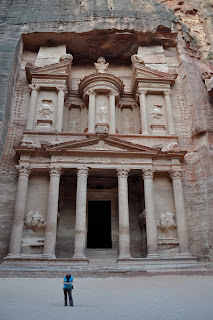 From the treasury we made our way to the Monastery. We passed thru the Royal Tombs, and still there were very few tourists! To get to the Monastery you must climb up a path, and typically it takes about 1hr to get there, or 20min on a donkey. Never having been on a donkey, and being pressed for time I convinced Jen that this was the way to go. Not a great idea. Lets just say my donkey had issues related to the placement of its feet- they liked to slip. Basically we screamed about half the way, and then begged the Bedouin boy to let us off- we would walk the rest of the way.

Arriving at the Monastery is amazing. It appears similar to the Treasury, but is more open, and the space and experience is entirely different. Because of the distance and time needed to get there, most tourists never get to see this area of Petra. We arrived there about 9am, and it was already starting to get too hot. Luckily, in this area there was plenty of shade! 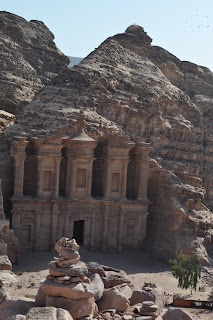 We then headed back down, passing many people who looked like they might not make it to the top due to heat and exhaustion. I myself thought Jen might have to carry me out- as it gets way to damn hot in the Middle East! As we walked back towards the Treasury the crowds started to make their way. The tourist buses were obviously just arriving, and we were so thankful we had come early. We headed back to our hotel to the waiting driver we had booked to take us to Jerash for our final night in Jordan. 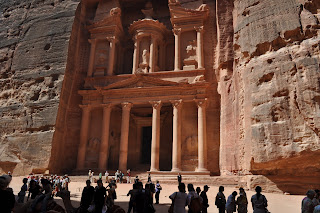