Our last night in Jordan was spent in a smaller town in the north of the country. We checked into the Olive Branch Hotel for the night. This hotel is located about 10minutes outside of Jerash, amongst the olive trees hence its name. The landscape was very rocky- and pretty much how I would have pictured things to be in biblical times.

Jerash is known for its well preserved Roman ruins dating back to 129AD. The site is quite large, but doable in a couple of hours. The ruins consist of an impressive arch, roman roads, a well preserved oval plaza, baths, theatre, and temple. The ruins were originally of Christian origin, until Islam came to the region. There is remnants of a mosque now. We walked the site, and were approached by a creepy dud who asked to have his picture taken with me. I seriously question what is wrong with men in this part of the area. Many, many men have asked to either take my photo, or have there photo taken with me. What are they later doing with them?? I sorta cringe to think about this. Anyways, here are a few photos from Jerash. From here we headed up to the Syrian border- which is the start of a great afernoon which I will blog of later! 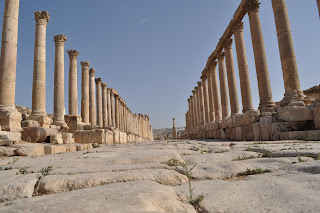 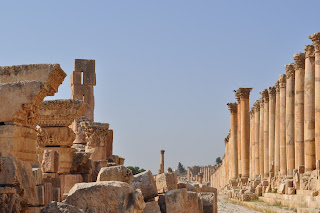 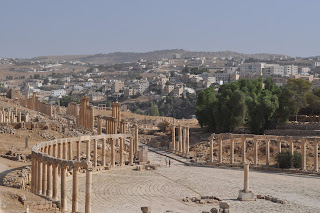