Agra- The Land of the Taj Mahal

The drive from Delhi to Agra was chaotic and congested. 2 lane roads became 4 and 5 lanes, and took us almost 5 hours. Every time we stopped alone the way we were accosted by beggars, children, hawkers, and men with monkeys- to be honest the monkey's scared the crap out of me (can you imagine getting bit by one of them?) So gross.

We got a great sleep our 1st night there, and woke up early to get in line to see the Taj. The complex doesn't open until sunrise, and we were there at the foggy time of year when often the Taj isn't visible in the morning due to the fog. We decided to take our chances and they paid off!! It was a chilly, but sunny morning, and I was actually surprised that there weren't as many people as I thought. The Taj is breathtaking, and amazing in that it was built almost 400 years ago, and still stands strong. 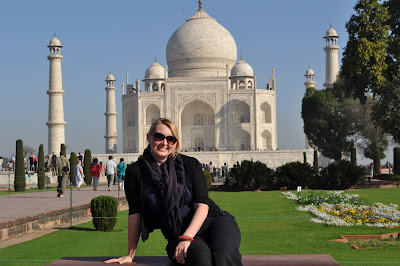 Our tour guide/ photographer filled us in on the history of the Taj- which is too long to recount here (and isn't that what wikipedia is for anyways?) We sent about 2 hours there taking the obligatory tourist photos, people watching, and just wandering. We visited the emperor and empresses tombs- where signs are prominently displayed requesting tourists NOT to take photos, which mostly went ignored (however; not by us, as our tour guide might have had a stroke!!)

From the Taj we visited Agra Fort which only 20% is actually tourable- the rest is occupied by the Indian military and off limits. The complex is enormous, surrounded by well manicured lawns and gardens. The Moghal emperor Shah Jahan was put under house arrest here, and spent his dying days looking down the river at the Taj which he build in memory of his deceased wife. There are so many distant beautiful views of the Taj from Agra Fort!
Agra is known for its local cottage industries. The Indian government regulates all handicrafts in the area- with set prices. Many industries in the area were forced out due to pollution of the Taj. We toured local carpet makers and a place specializing in inlay ed stone furniture similar to the ornate stonework that decorates the outside of the Taj.

Our last night in Agra was spent across the Yanuma river in a garden looking at the Taj while the sun set. It was beautiful, minus the constant pestering of children requesting money so we could take their picture. 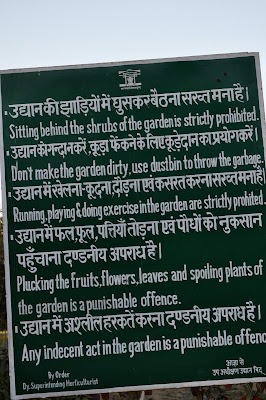