This past week I spent a lovely, mostly relaxing 6 days in Sri Lanka. Why Sri Lanka you might ask?? Cheap cheap tickets!! Before planning this trip I really knew nothing about this island south of India, apart from the devastating Tsunami that hit in 2004. I will write more about the after effects of the Tsunami when I blog about the beach area. For now lets talk about Kandy! The 3 of us (a Canadian, a Kiwi, and an American) arrived late in the afternoon via Riyadh-Abu Dhabi- Colombo. We had arranged a driver to pick us up at the airport, however; there was a last minute switcharoo as the original driver got a last minute visa to the UK, but he sent a replacement driver in his place.

We headed off towards the city of Kandy- we had booked to stay 2 nights at the Mansion Hotel about 8km outside of Kandy. The roads are very narrow, scattered with any variety of pedestrian, stray dog, bicycle, motorbike/scooter, 3 wheeler, car, van, bus, semi, cows ect. Driving can be rather "white knuckling" and the phrase "Oh Shit" became my theme statement every time I got into the van. We arrived at the Mansion after dark, and it was a little difficult to find, but well worth the trouble. The place is beautiful, large, and welcoming. The bathroom alone was practically the size of my room back in Saudi. We checked in, headed to the outside eating area, and proceeded to down several bottles of delicious wine we acquired at the Duty Free in the airport. Ah Heaven!

The next morning we awoke and I vaguely recalled telling the waiter the night before (thru my wine haze) that I did not want a western breakfast in the morning, but instead wanted the Sri Lankan breakfast!! My stomach cringed- and I thought "you'll probably regret that decision later!" To my surprise it was delicious- an assortment of curries served over top these things called string hoppers which loosely resemble Top Ramen noodle paddies. Delicious- I would come to eagerly look forward to breakfast this entire trip, and would pout if they ran out or worst weren't available. 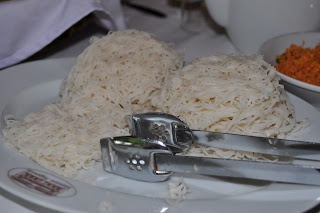 We spend our first day exploring Sigiriya which is about a 2-3hr drive from Kandy. Sigiriya is a enormous rock that served as a palace and a monastery sometime around 490's AD. It is known a UNESCO site- and they are working on uncovering more of the ruins. It is said that the king who build the palace had 500 women in his harem who lived (and worked) on the site, and he had topless paintings of them adorning the grounds. Sadly only about 15 or so remain. Interestingly all the paintings we saw the women were incredibly large breasted- picture DD sized, and not that I stare at women's breasts, but none of the local women appeared to be packing breasts like this?? Anyways... Sigiriya is a moderate climb involving some steep steps and takes about an hour to get up. The site is pricey by Sri Lankan standards and costs $25US to get in. We hired a guide which was well worth it for the amazing history alone. This was definitely a highlight of the trip, and the views from the top are stunning!! 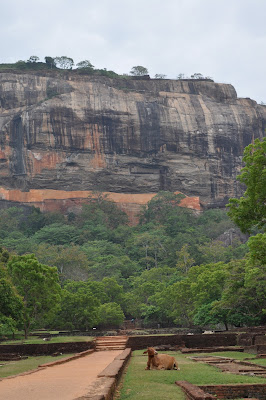 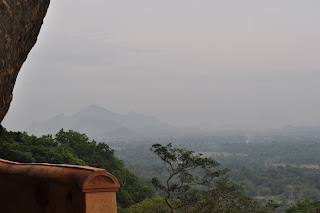 There are many restaurants near Sigiriya, but I would avoid eating in this area if you are following any type of budget. This area is a tourist haven, and you will pay for meals accordingly. We of coarse didn't know this- and paid well over $100US for a nothing special meal. From here we toured a local Batik factory- and saw the fabric dying process 1st hand. Batik is hand dyed fabric in complicated patterns involving many different colours used as wall decorations or clothing. Pretty cool, but once again not nearly as cheap as I would have expected.

After a full day of touring we headed back to our hotel for what may have been the slowest dinner in the history of time. Luckily we had more wine to pass the time.... and Uno (some old school entertainment). We loved staying at the Mansion, but meals were average (apart from dinner) and service very very slow. Now on to the temples!!
Posted by Kristine at 3:38 PM